Standing on the bunker del Carmen overlooking the city of Barcelona bathed by the sunset light, La Sagrada Familia boldly rises above the buildings. I have always had mixed feelings passing by the grey façades of the most visited landmark of the capital of Catalonia invaded by hordes of tourists. It is only by entering this basilica that I went from a dubious passer-by to being an admirer of Gaudí’s technical genius and refined symbolism.

“The work of man should never rise above the work of God” said world’s most famous modernist architect who got appointed for one of Europe’s largest contemporary projects. The still-under-construction Sagrada Familia by Gaudí reaches for the sky in the heart of El Eixample district and attracts thousands of people each day. The Catalan architect Gaudí, also famous for the modernist buildings of Casa Batlló, Casa Mila, Palau Güell… was only 31 when he became in charge of the whole project of La Sagrada Familia in 1882. Gaudí dedicated his life to architecture and had kept working on his masterpiece until his sudden tragic death in 1926 in the nearby Sant Pau hospital, another temple to modernism after being run over by a tramway as he was leaving La Sagrada Familia. Aimed to be completed in 2026 as a tribute to its most passionate architect, La Sagrada Familia is a temple of light, nature and faith.

Full of details and symbolism one can spend hours discovering the basilica. Here are a few pointers to decrypt it.

Three straight façades describe the most important stages in the life of Christ: birth, death and entering the eternal life.

This first façade is the only one that Gaudí saw complete before his death. Three portals symbolize Joseph, Mary, and Jesus in the centre. They are decorated with an uncountable amount of floral and faunal elements conveying a profusion of life. Lively statues of angels and scenes of daily life of young Jesus are dominated by the tree of life with its white doves of salvation. The massive bronze doors full of leaves, flowers, insects and animals convey the joy and optimism of this Nativity façade and invite us to get inside.

The tree of life with Barcelona in the background, La Sagrada Familia, Barcelona

The temple of light and nature

Stepping inside La Sagrada Familia provides an unexpected feeling. Behind the grey façades a forest of tall columns branching out at the top to hold the ceiling is bathed by a beautiful natural light changing by the hour to symbolize the rhythm of nature. “The sun is the finest painter”, as Gaudí liked to put it, from the cooler blue tones of the stained-glass windows that refracts the light at sunrise, to the warm tones of sunset.

The four central and tallest columns are decorated with the colourful glass-stained symbols of the four evangelists: the eagle for John, the angel for Matthew, the lion for Marc and the winged ox for Luke. A golden triangle above symbolises God.

The central nave is dominated by the balcony for the choir where 700 people sang together when Pope Benedict 16th blessed the basilica in 2010. 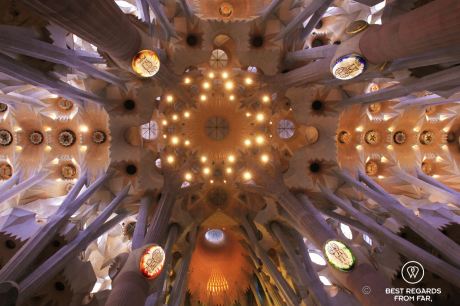 La Sagrada Familia will contain 18 towers in total once finished. The tallest tower symbolises Jesus and its 172.5 metre are just a few metres shy of the Montjuïc Hill. The four surrounding towers represent the evangelists. The slightly lower 138-metre high tower of Mary rises above the lowest 12 towers standing for the apostles. Ascending the towers gives an insider’s look into the final building stage. Workers are extremely focused at more than 100 metres above the ground. Different stones and materials are used for the columns based on the weight they need to carry. Even all the way up the amount of details can make one’s head spin, and even more so can the spiral staircases going down! 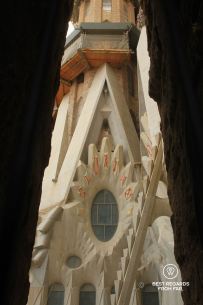 The tree of life with Barcelona in the background, La Sagrada Familia, Barcelona 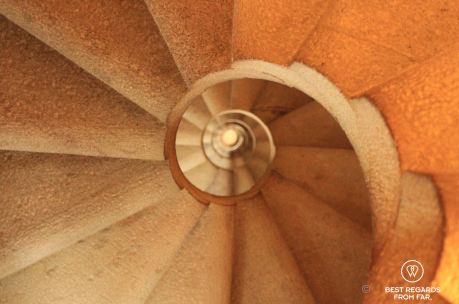 Exiting the basilica via the bronze doors on the side of the Passion façade allows one to read the Lord’s Prayer in Catalan and 15 other languages, welcoming everyone in this temple of God. The cheerfulness of the Nativity façade contrasts greatly with the suffering of Jesus on the way of the cross. Straight stone pillars remind the ribs of a skeleton, angular sculptures convey the brutal pains Jesus had to suffer through while harsh shadows are casted on the façade by the setting sun, symbolising the death of Christ.

Knowing that he would die before completing the project, Gaudí trained his disciples, who paid their tributes to the master by representing him and echoing his work on La Pedrera, his last completed work. The most obvious recall is the Roman soldiers resembling the chimneys overlooking the Passeig de Gràcia.

The heavy doors with the Lord’s Prayer in 16 languages, La Sagrada Familia, Barcelona 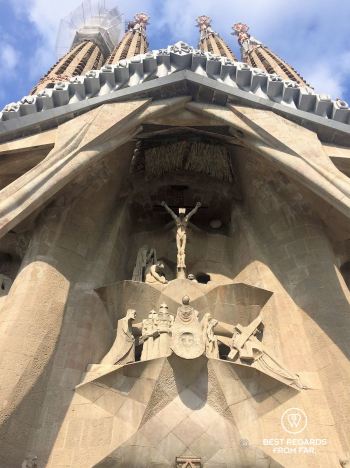 As of today the Glory façade is still under construction. It is supposed to be the main façade representing the road to God through Death, the Final Judgement, and eventually Glory. The façade will be covered in demons, idols and false gods representing Hell. A representation of the seven original sins will decorate seven large columns at their bases resonating with the seven heavenly virtues at their tops.

The towers of La Sagrada Familia rise proudly above the city, recognisable from every corner of Barcelona. Reflecting back on Gaudí’s words while having a bird’s eye view of the city, it seems that the work of man has not risen above the work of God yet. Barcelona is still surrounded by higher hills, but it might not be for much longer as the booming capital of Catalonia keeps expanding and is struggling in keeping its balance. 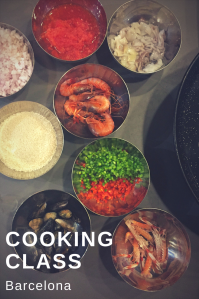 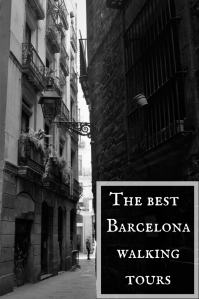 4 thoughts on “Decrypting the temple of light, La Sagrada Familia”