La Pedrera is an innovative & iconic building in the heart of Barcelona designed by Gaudí. Some say its rooftop may have inspired George Lucas as he was writing Star Wars…

In 1854, the city walls of Barcelona were demolished and an urban plan to extend the city was conceived. This is how the grid of El Eixample district came to life. To the contrary of the narrow medieval streets, this modern city was making life more comfortable for the wealthy who could afford moving there. The Passeig de Gràcia was its most prestigious street. And this is the street Pere Mila & Roser Segimon chose to commission the most fashionable architect of the time, Gaudí, to design La Casa Milà on an 1835-square-metre lot. As it was typical for the bourgeois, the couple was to live on the main floor of the residential building and rent out the other floors to generate revenue.

In his 50’s, Gaudí is at the top of his art. He has just finished renovating the Casa Batlló, just 500 metres away. With the Casa Milà, he is going further and defying the conventions of the time, even in the midst of Catalan modernism. He demands to work in total freedom. His ideas are not always approved by the promoters as he is off budget; and off fashion according to his contemporaries. The Casa Milà with its very stony façades is soon baptized La Pedrera (The Quarry) by the incisive press. 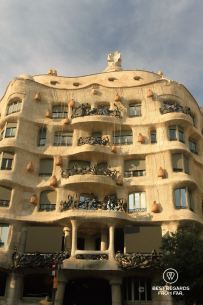 However, the apparent dull façades hide the genius of Gaudí. In order to give more flexibility to the residents, the whole building is supported by a mesh of columns and beams. This way, there is no need for load-bearing walls and every wall can be moved or taken down making every of the 5 residential floors a potential open space.

Walking through the turtle-shell-like wrought iron and glass portal, we enter an internal patio. Gaudí designed the building around two of them in order to provide natural light and proper ventilation. Close to 200 windows pave the internal walls, with their surface area decreasing as we go up to ensure the lower floors are also bathed by sunlight. Frescoes with mythological and natural themes colour the stone. 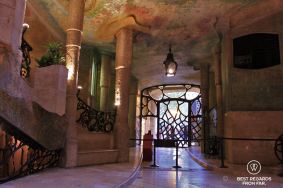 A ramp leads to the basement, one of the first underground parking garages of Barcelona. Across the patio, an elevator goes up to the apartments: a revolution for the time!

The 1323 square metres of the Milà apartment have been refurbished to showcase a bourgeois flat of the early 20th century. Grabbing a door handle, we realize the extreme attention to details of the architect: often the handles were shaped just by squeezing clay with one’s hand making them the most ergonomic possible. The furniture follows the same philosophy with its nice curves eliminating rough edges.

The respect of Gaudí for nature and craftsmanship is obvious as we enter the attic resembling the ribcage of a sleepy imaginary animal. 273 brick arches connected to a back bone shape this 800 square metre open space. Used by domestics for the laundry, they also had to open the windows in the summer and keep them closed in the winter to thermally regulate the building. Gaudí defined the optimal shapes of the arches by hanging ropes to the floor plan in order to get the most stable and strongest design. Then, he just had to reproduce it upside down in cheap bricks. More than a century later, 3D computer models confirm the genius of this conception!

The attic of La Pedrera, Barcelona

Going from surprises to surprises, we eventually make it to the rooftop. Gaudí mastered the techniques he used at Palau Güell and Casa Batlló, making it probably the most recognizable rooftop of Barcelona. The usually functional and ugly elements such as ventilation shafts and staircase exits are disguised into sculptures overlooking the Passeig de Grácia. Broken bottles and ceramics make a daring trencadís wrapping up a shaft, when others look like Stormtroopers or Darth Vader… 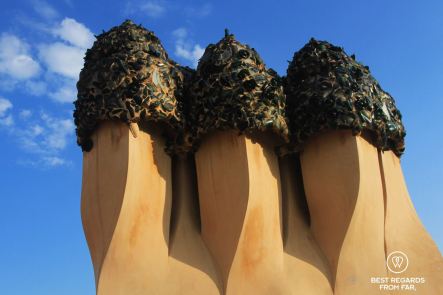 Trencadis on the rooftop of La Pedrera, Barcelona

La Sagrada Familia from the rooftop of La Pedrera, Barcelona

First very criticized, La Pedrera has become one of the most iconic buildings of Barcelona. A masterpiece of Gaudí completed in 1912, this is his last civil engineering work before he focused exclusively on La Sagrada Familia, his life-long project. 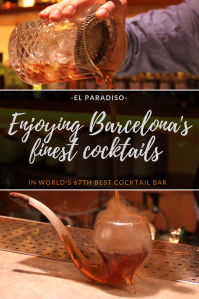