The Sant Pau Art nouveau site is off the very beaten path of the modernist landmarks of Barcelona. A stone’s throw away from La Sagrada Familia, it is an impressive hospital that was built in the early 20th century and one of the most beautiful examples of modernist architecture.

At the turn of the 20th century, the population of Barcelona was rapidly growing and lacking a modern hospital. The 1401 Santa Creu hospital (the hospital of the Holy Cross) that had been in function for five centuries in the gothic heart of Barcelona was outdated. A new hospital was greatly needed.

Born and raised in Barcelona, and living in Paris where he got inspired by Lariboisière, the banker Paul Gil i Sera (1816-1896) became a generous benefactor and devoted a big part of his fortune to the construction of a new modern hospital in his hometown. It will take almost 30 years to be completed thanks to Paul Gil, and also other families and anonymous benefactors whom chipped in once the money ran out in 1912, 10 years after the start of the construction (and hardly a fourth into the original plan). 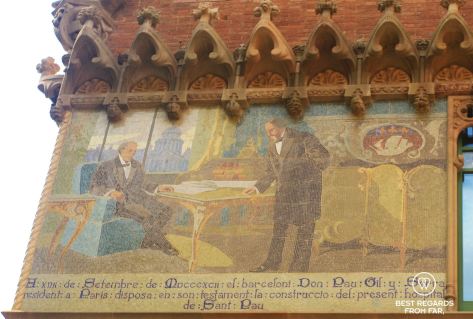 Pau Gil in Paris funding the construction of the Sant Pau hospital, Barcelona

Some of the ceiling ceramics of the Sant Pau hospital, Barcelona

The outstanding modernist architect Lluís Domènech i Montaner (1849-1923), politically engaged for the Catalan nationalism, and one of the teachers of Gaudí and alike was in charge. In 1902, he starts the construction of Sant Pau, at the edge of town in the middle of fields. The fear of the cholera epidemics of the 19th century made it an obvious choice to build the hospital away from the city centre, in the new and modern El Eixample neighbourhood.

Beyond the very colourful and grand architecture that make the Sant Pau Art nouveau site look like a palace, it is a very fine example of an ultra-modern hospital of the time where the accent is placed on sanitation and hygiene, as well as the comfort of patients to speed up their recovery.

Several pavilions surrounded by gardens and interconnected by 1km of underground tunnels are organized based on different medical specialties. Potential contagion is taken seriously and patients are assigned a bed according to their conditions. Every pavilion is independent with its day room, nurse room, bathroom, and water tower.

Some of the 1km of underground tunnels, the Sant Pau hospital, Barcelona 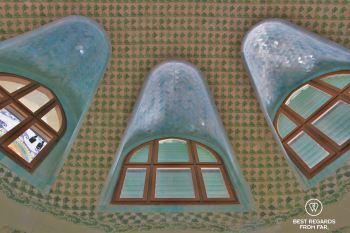 Rounded corners to improve the hygiene of the Sant Pau hospital, Barcelona

Colour-therapy inside a pavilion of the Sant Pau hospital, Barcelona

A pavilion with its water tower, the Sant Pau hospital, Barcelona

The ceramic tiles covering the floors and walls could be cleaned easily, and even more efficiently as every corner is rounded to prevent bacteria from developing. Contrary to the urban grid of El Eixample neighbourhood, pavilions face south in order to maximize the sunlight through the skylights. Only surgery rooms face north to improve the comfort of the medical staff. Colour therapy is applied to the greenish-blueish halls to bring calm to residents. Gardens with medicinal plants, flowers and orange trees are created by the pavilions to speed up the recovery of the patients.

Sant Pau with its natural lighting, good ventilation, and exquisite decor is one of a kind in the world and showcases Barcelona as a great and modern city. As such, the administrative building is built with the most expensive materials such as red marble and Roman mosaics to refer to the prestigious past of Catalonia. In parallel, the symbolism highlights charity, religious faith and Catalan pride.

The rich decoration of the Sant Pau hospital, Barcelona

Some of the pavilions of the Sant Pau hospital, Barcelona

The rich decoration of the Sant Pau hospital, Barcelona

Some of the ceramics of the Sant Pau hospital, Barcelona

Unfortunately, after only 10 years and only 10 pavilions built, Paul Gil’s money runs out. Some more pavilions will be built, a bit faster and a bit cheaper and the hospital will run until 2009. Out of the 48 pavilions originally planned, only 27 will be built (and a fraction of them in Art Nouveau style).

Hospital for the poor, one can only wonder how modest families living in the dark and humid medieval centre of Barcelona must have felt, arriving at Sant Pau, an ultra-modern building, open and colourful and bright! A pioneer in improving the comfort of patients as beauty and tranquillity speed up the healing process, today, Sant Pau is a true Art Nouveau landmark and a must-visit in Barcelona.

Pin this pin for later.

Pin this pin for later. 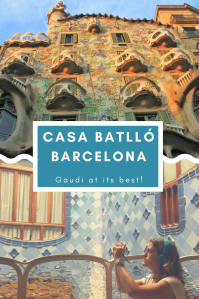 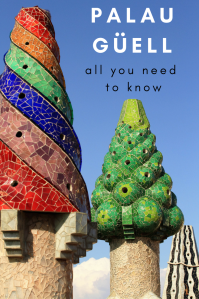