Birthplace of Pierre-Paul Riquet, the man who linked the Atlantic Ocean to the Mediterranean Sea in the 17th century by carrying out the largest civil engineering project of the time, the Canal du Midi, Béziers is also where the masterpiece of Riquet can be visited: the 9 locks of Fonseranes.

Having left Sète some 50 kilometres prior, we leave the shade of the centennial plane trees along the Canal du Midi behind to bike over the surreal Pont-Canal de l’Orb. This 1857 aqueduct, both bridge and canal, was built so that boats with their precious wheat cargo would avoid being tumbled over in a violent rafting adventure along the Orb River and its moody droughts or floods throughout the year. 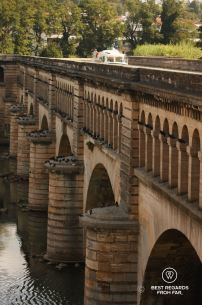 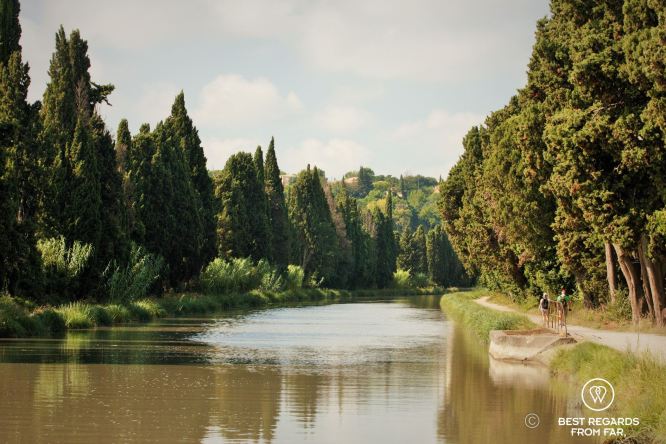 With the massive Gothic cathedral of Saint Nazaire in Béziers overlooking the river to our right, a pleasure boat navigates silently like suspended in mid-air, roughly 12 metres above the Orb River. Just as we are, it is making its way to a masterpiece of engineering and the highlight of the Canal du Midi: the 9 locks of Fonseranes (les neuf écluses de Fonseranes).

Struggling on our bikes to get to the highest lock without setting foot on the ground, we clearly feel the great elevation difference between the first and the ninth lock: 21.6 metres over a length of only 312 metres.

Inaugurated in 1681, after 14 years of hard work digging with shovels and pickaxes, the 240-kilometre canal connects the Atlantic Ocean to the Mediterranean Sea by linking the Garonne River in Toulouse to Sète on the Mediterranean seaside. It allowed boats to avoid the long navigation around the Iberian Peninsula and the dangerous pirate-infested strait of Gibraltar by cutting the journey by about 5000 kilometres. More importantly for the French king Louis XIV, it deprived the kingdom of Spain of its transport tax and increased the taxes collected in France. The genius behind the canal was not even an engineer, but a passionate and persistent salt tax collector from Béziers: Pierre-Paul Riquet who could convince the king, and realize a project that had been dreamed of since the antiquity and the Roman emperor Augustus.

View of one of the locks of Fonseranes, Béziers 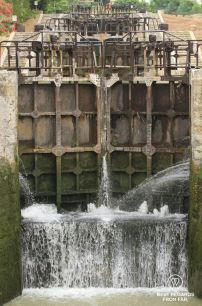 The first lock of Fonseranes is opening

View through the locks of Fonseranes, Béziers 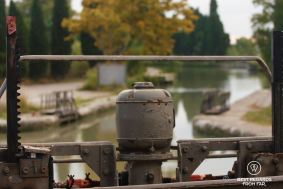 Beyond dams, the 63 locks, the 7 aqueducts, the 350 bridges, and the first tunnel for boats in Malpas, Riquet’s real breakthrough was finding a way to water the canal, and more specifically its highest point at 189 metres above sea level in Naurouze. To do so, he gathered water from about a dozen streams in the Black Mountain (La Montagne Noire) in the very south of the Massif Central into a reservoir big enough to water the whole canal, also building world’s largest dam at the time at the Saint Ferréol retention lake.

Today, the Canal du Midi is only used for pleasure boating: 10,000 of them queue between March and October to cross this chef d’œuvre of ingenuity and engineering. Just like back then, travellers can rest in the coche d’eau, the houses built along the canal that were used by tow-men, boat captains and travellers of the time. The first class dining room made place for a gastronomic restaurant with a fantastic view on the majestic cathedral of Saint Nazaire in Béziers. In the newly renovated coche d’eau, rooms where passengers spent the night right above the tow horses host an immersive movie about the history of the canal. The gardens where the families operating the locks used to grow their vegetables provide a peaceful viewpoint immersed in Mediterranean scents of fig trees, cypresses, rosemary bushes, home to many loud cicadas. 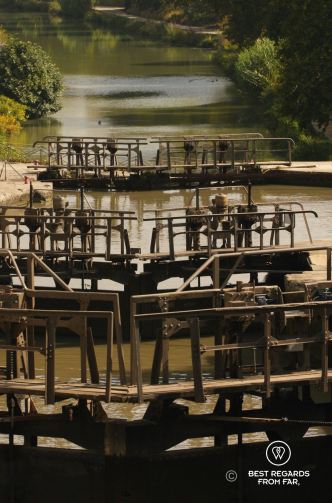 Some of the nine locks of Fonseranes, Béziers 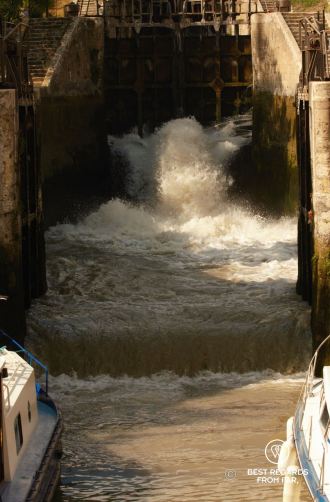 Water flooding the lower lock to lift boats, the locks of Fonseranes, Béziers

Bezier’s St Nazaire cathedral from the banks of the Canal du Midi, Locks of Fonseranes

Among many visitors intrigued by this UNESCO World Heritage Site, we observe how a few vessels are slowly lifted up from one basin to the next, thanks to a well-orchestrated opening and closing of the successive locks, before continuing our biking adventure to the unique Malpas tunnel.