Exploring the Canal du Midi and leaving Sète and the locks of Fonsérannes behind, we bike about eight kilometres further into the direction of the Atlantic, along the narrow and bumpy towpath where horses used to drag the heavy loaded vessels before engines made it obsolete.

A welcoming village along the Canal du Midi, France 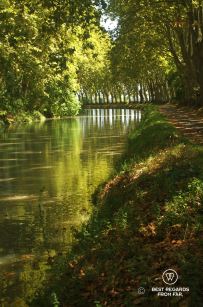 After the cute village of Colombiers and its excellent bakery, we reach the tunnel of Malpas, the first canal-tunnel in the world. Even if only the boat tunnel can be seen, there are two more tunnels dug below it. The first one dates back to the 13th century and was drilled to empty the nearby Montady lake. This existing tunnel was Pierre-Paul Riquet’s inspiration for the canal tunnel which was excavated in 1679 through the hill d’Ensérune where you find the oppidum d’Ensérune, an ancient Roman settlement inhabited between the 6th century BC and 1st century AD, along Roman highway: the Via Domitia.

Biking the Canal du Midi along the old towpath

The Malpas tunnel can be a challenge to navigate! 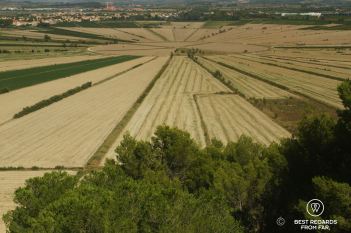 The drained lake by the Oppidum d’Ensérunes, France

The second tunnel dates back to the 19th century and was used by trains. It is exactly this railway system, created by Napoleon, which killed the success of the canal that reached its peak in 1856. Before the 240-kilometre canal was dug, Toulouse and Sète were 4 days apart; the canal put them “only” 32 hours apart; and today the intercity train connects both cities in less than two hours. Maybe an enjoyable 2-day bike ride along its well-equipped banks sounds more tempting?