We are standing a few kilometres south of the fortified city of Carcassonne, with the vineyards rolling down from our feet to the base of the majestic ramparts, and the Black Mountain in the background. In Southern France, Carcassonne is a marvel of the Middle-Ages: an entire city completely fortified with its narrow cobblestoned medieval streets, its imposing castle, and gothic basilica. Carcassonne remains the most complete example of French medieval military architecture, and it took about 25 centuries to shape Carcassonne as it is today… 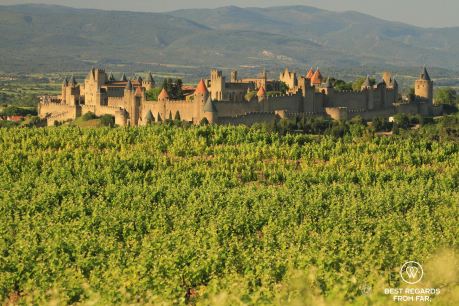 The old city of Carcassonne seen from the vineyards, France 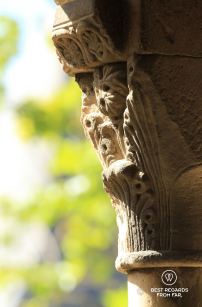 Bronze mock up of Carcassonne with the castle in the background, France 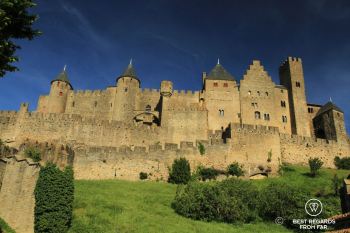 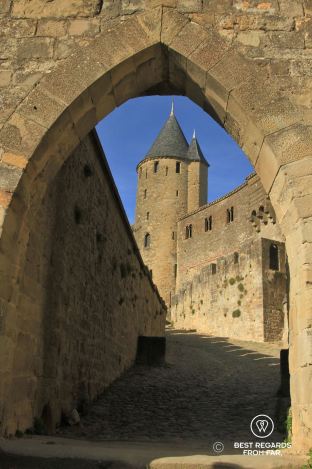 During the Middle-Ages, the Catholic clergy lived ostentatiously and dissident movements appeared. The Cathars became more influential in Southern France, advocating for the return to a pure faith and living in poverty detached from possessions of the physical world. The pope felt threatened and tried to stop this movement that he defined as heretic. When Pierre de Castelnau, a papal legate in charge of stopping the Cathar heretics (also called the Albigensians) in Southern France gets killed, the pope Innocent III announces the crusade against the Cathars. In 1209, French noblemen gather in Lyon and start marching South during a military campaign that will last for 20 years. Most are motivated by economic expansion as the noblemen are entitled to the southern lands they will conquer. The king of France, Philippe II himself joins the crusade as he sees a way of expanding his territory to include the Toulouse area, and diminishing the power of the rival counts of Barcelona.

Valérie and Jean Francois, the knights of Carcassonne, ILC, France

The walls of Carcassonne and its medieval towers from above. Blue skies, small houses on the right, green trees and snowy mountains in the background.

At the head of the crusade, Simon de Montfort makes progress fast and arrives in Béziers in the summer of 1209. The Cathars refuse to surrender. The whole city is burnt down leaving 20 000 casualties behind. The word spreads fast. The resistance is little a few weeks later when the armies are besieging Carcassonne. Negotiations with Raymond Roger de Trencavel, the powerful Count of Trencavel whose family has been ruling the major southern cities including Carcassonne for three centuries, start. Inhabitants are allowed to flee the city as long as they leave all their possessions behind. The crusaders have won, but the city is far from resembling today’s impregnable Carcassonne: a few ditches from the Iron Age occupation (800BC), ramparts and towers built by the Romans (118BC-462AC), more fortifications by the Visigoths (462-725), hardly any traces left by the Arabs (725-759), and only the castle, the château comtal, that looks more like a big mansion could have slowed down the invaders. 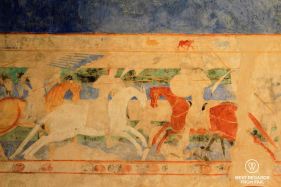 Mural displaying the fights between the Franks and the Arabs, cité de Carcassonne, France

Another Trencavel. Another king of France. Raymond II, the son of Raymond Roger reclaims Carcassonne in 1240 but despite the support of the population, he fails. The king of France Saint Louis forgives, but remains cautious and forces inhabitants to leave Carcassonne and settle on the opposite bank of the Aude River. This is the start of La Bastide Saint Louis, or what is referred to today as the new town of Carcassonne. Saint Louis pursues his fortification works making Carcassonne impregnable: now that the city belongs to the French kingdom, it is at the border of the Spanish kingdom of Aragon and must be protected. But no one will ever try to actually attack Carcassonne with its 52 towers, three kilometres of double ramparts, and moat. Its military role will disappear slowly.

Empty ourtyard of the medieval Carcassonne Castle with a tree, sun, shadow and blue skies.

In 1844, the architect Viollet-le-Duc starts one of the most audacious restoration. It will last for 50 years and transform the sleepy city, partially destroyed, in which poor families settled in the buffer zone between the ramparts into a medieval splendour and one of France’s landmarks. The restoration is also controversial as building techniques from northern France are used and it is the romanticized Middle-Ages that Viollet-le-Duc recreated, sometimes far from the reality of the medieval Carcassonne.

The medieval city of Carcassonne with its Roman and medieval ramparts, France

Children studying a bronze modal of the Carcassonne City.

Today, invaders wear colourful T-shirts and are armed with selfie-sticks and ice-creams. The city faces new challenges as the restoration is ongoing, and it is tricky to keep the right balance between the authenticity of the medieval town, the practicality of living within the walls for the only 50 proud inhabitants, and the comfort of the millions of tourists flocking together every summer. Clearly, the balance seems right when visiting Carcassonne off season, we realize, as we are travelling back through time wandering its narrow medieval streets.

6 thoughts on “The medieval splendour of Carcassonne, France”