“Al Hamra” it says on the dusty road sign along the way towards the majestic Jebel Shams in the Western Hajar Mountains of Oman. In a last-minute decision I turn the wheel of our rental car and notice a large date plantation irrigated by a traditional falaj. I park the car and we cautiously venture in the desolated streets lined by ruined mud houses to explore the old village.

The old village of Al Hamra and its date plantation, Oman

The falaj going through the old Al Hamra village, Oman 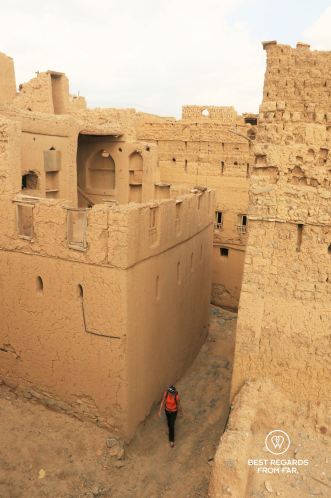 The streets of the old Al Hamra, Oman 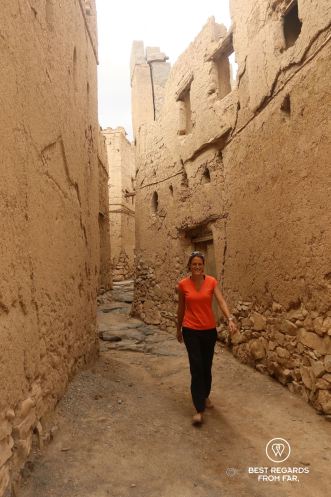 The streets of the old Al Hamra, Oman

One of the many abandoned mud villages in Oman

It is a surreal experience to walk through a completely abandoned village at the foot of the mountains, walking over piles of rubbles or on large slabs the houses were built on. The old village of Al Hamra has been desolated since its thousands of inhabitants left between 1995 and 2005 when modern life knocked on the door of these mud houses. They did not go far: the new Al Hamra with its more comfortable new houses with A/C units, its large streets close to the main road and its schools is just around the corner.

In Al Hamra’s abandoned houses, wonderful details such as wood carved doors, ancient palm beams or nicely sculpted niches make us feel like we are discovering a delicate treasure.

The old Al Hamra at the foot of Jebel Shams, Oman

Suddenly I hear a woman’s voice echoing in the empty streets. Around the corner, an elderly lady wearing colourful traditional clothes and headscarf is discussing with another one popping her head out of an opening on the first floor of a rather tall building. As she sees us, she invites us right away into the house. We enter through a beautifully carved wooden door to find a couple of women extracting oil out of moringa seeds. After a few words in a broken English, some smiles, and many gestures, we find ourselves rubbing the oil into our skins and already feeling less wrinkled!

Without knowing it, we have just stepped into Bait al Safah, a 400-year-old mud house that used to house the former leader of the village. Khalid, a young man dressed in a dishdasha explains to us that a small group of locals cleared up the trash, renovated the house, and furnished it nicely in order to showcase travellers the traditional way inhabitants used to live here for centuries. Bait al Safah has become a living museum. 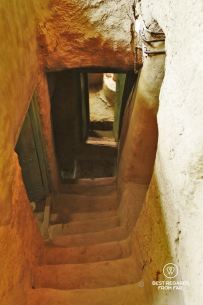 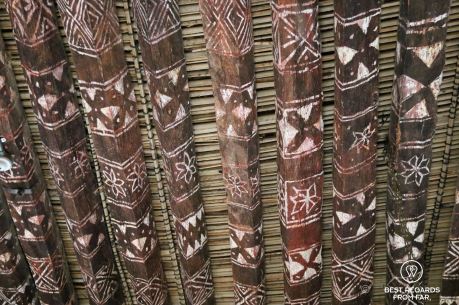 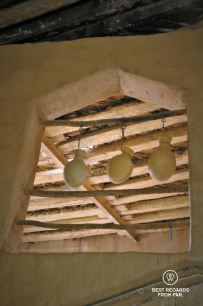 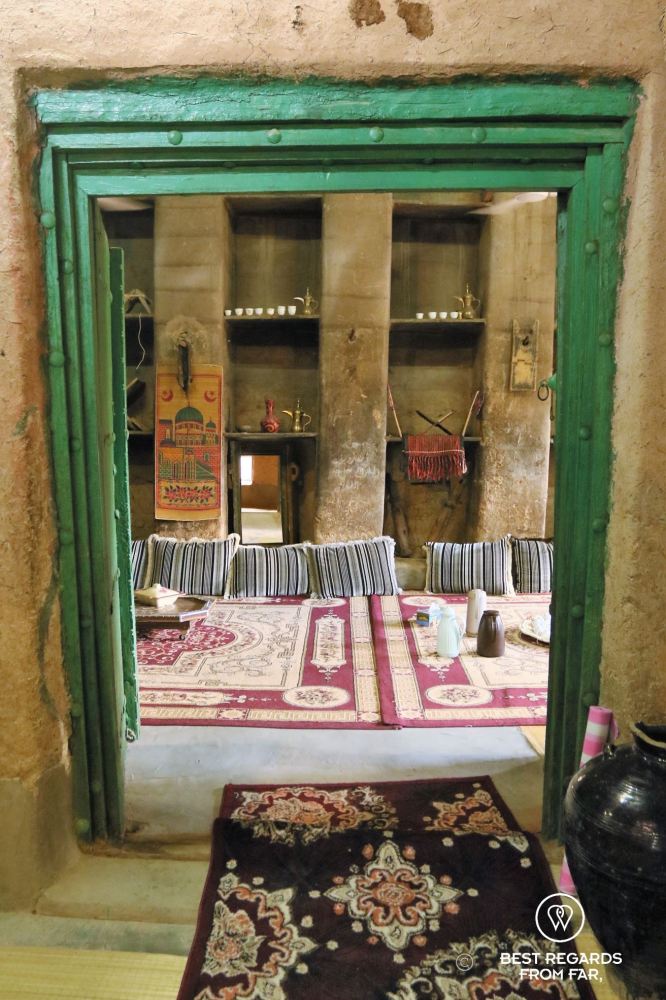 Exploring the house, we wander in its many rooms decorated with traditional objects made of wool, leather, clay or palm. Up the labyrinthine staircases we end up on the rooftop admiring the view on the mountains. Heading to the kitchen, we notice the hand painted ceiling beams, and the large internal openings providing a comfortable natural ventilation. In the kitchen area women are busy: grinding grains, baking khuboos (the traditional Omani paper thin bread – also spelled khubz), mixing sandalwood powder with a few secretive ingredients to make beauty products…

Soon we enter the majlis, bare feet of course and with our oily skin and the orange mark if the sandalwood powder on our foreheads.

Under Khalid’s guidance we sit on the large carpet on the floor with comfortable pillows against our backs. Khalid stays standing and grabs a traditional coffee pot from a large silver tray in the centre of the room. He pours the qahwa halfway in small cups: as a polite host, Khalid signals us this way that he has all the time in the world for us and it will be his pleasure to refill the cups as often as we wish (filling the cup up meaning he has no time). “In the old times, the imam would receive believers to settle their issues over dates and qahwa. As there were many secrets involved, he would choose a deaf helper to serve: extend the arm to get some more, shake the cup to show you are done” Khalid explains. The dates that were harvested a few months ago from the nearby palms sweeten the qahwa as Khalid details his youth in Al Hamra.

It is hard to imagine the evolutions Omani people have gone through over a generation: back in the early 1970’s there were only two schools in the country and today there are 5 in the new village of Al Hamra only! When just a few kilometres of roads were paved in the whole country, today Omanis drive oversized 4×4 on 3-lane highways in the middle of the desert! The youth speaks English, studies, travels the world, and often moves in Muscat. The old villages have been abandoned as Omanis answered the call of modern life. Thanks to the will of Oman to develop tourism, a few old villages are being renovated for our greatest pleasure, and funnily teaches this youth so thirsty of progress its own traditions. 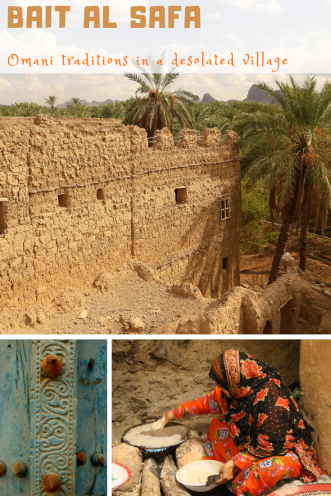 Save this pin for later

Save this pin for later

What to do in Oman: 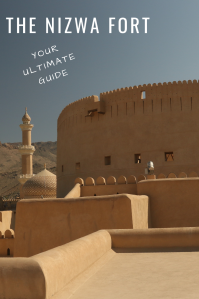 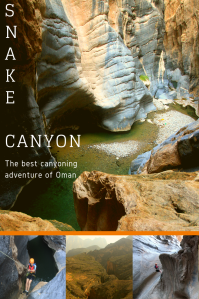 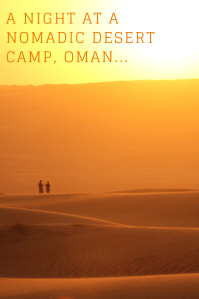 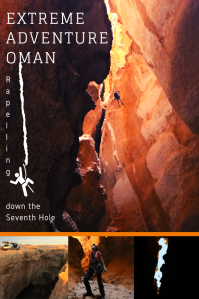 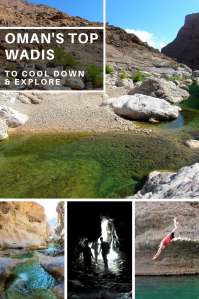 10 thoughts on “The mud villages of Oman [Al Hamra]”