The legislative capital of Europe has become a popular destination. If most visit during its thriving Christmas Market, exploring Strasbourg through the eyes of a local is always a good idea and even more so during the quieter periods. Join us and learn about its moving history, off the beaten path secrets, and gems!

1. And you think la Petite France is romantic?

One of the most photogenic – should I say Instagrammable – areas of Strasbourg may very well be the Petite France. Its picturesque foot bridges, narrow alleyways, flowers hanging by the windows of its 16th-century-half-timbered houses, cozy restaurants, and cute views on the canals give it a very romantic atmosphere. But it has not always been like this…

The picturesque houses of La Petite France in Strasbourg, France 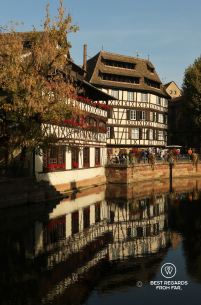 The picturesque houses of La Petite France in Strasbourg, France

During the Middle Ages, many French soldiers suffered from the less than romantic syphilis that they brought back from the wars they fought during the Italian campaigns of the 15th century. Getting rid of this sexually transmitted disease was hardly possible. They were sent out from most cities, like Paris, and infected soldiers marched to the Hospice des Vérolés in Strasbourg, a hospital specially erected – if I may… – to treat them. This illness became known by the neighboring Germans as “the disease of the French”. The infected soldiers however were not allowed to stay in the city center of Strasbourg and many stayed in what is now known as Petite France for that exact reason. To picture the medieval Petite France, add to this the fact that it used to be the tanners’ district: the otherwise delicious smells were mixed with the stench of urine, used by the tanners to clean the animal skins in the leather making process. The noise was barely bearable between the sound of the carriages on the cobblestones and the constant running mills…

Walk the romantic alleyways of Petite France now, and try to picture it as it was to add a dimension to your visit!

2. Unlike you may think, the French national anthem – La Marseillaise – is from Strasbourg

During the dark days of the French Revolution, France declared war to the Austrian empire. Troops needed motivation and a war song that would gather all men of France to protect and fight for their young republic. The song was written in one night by Rouget de Lisle in the heart of Strasbourg and entitled “War song for the army of the Rhine”. The catchy melody and powerful lyrics became the hit of the summer 1792. It arrived in Paris sang by soldiers from the southern town of Marseille (about 1,000km South from Strasbourg) on their way to fight for their beloved France. It was a success right away, but its title was found too long. Passers-by would simply ask the soldier where they were from and this is how it became known to the world as “La Marseillaise“. With the status of revolutionary song, it got chosen as the national anthem in 1795. Still today “La Marseillaise” is a reminder of France’s dedication to fight against tyranny and foreign invasion.

Close-up of the building in which the French National Anthem was written, Place Kléber, Strasbourg, France

Curious? Listen to the song here with French lyrics and English subtitles.

3. The lovely half-timbered houses – or taking IKEA to the next level!

These photogenic half-timbered medieval houses could be disassembled as the home owners did not own the land in the old times. In case they had to move, they could break down the house and rebuild it somewhere else, filling the gaps between the wooden structure with cheap materials from the field such as cow dung, grass or straw. Here in Strasbourg, some of them are very nicely decorated as their level of refinement indicated the wealth of the house owner. For example, the delicate and evocative wood carvings of the 16th-century Kammerzell house opposite the cathedral is a stunning example of a half-timbered house of one of the most powerful inhabitants of Strasbourg.

Look up and check out the ones in Petite France dating back to the 16th and 17th centuries and look for surprising details!

4. Changing countries while staying at home

Imagine changing nationality without moving away from your hometown: this happened to the inhabitants of Strasbourg four times in the fairly recent past! The architecture, food, and traditions are therefore a unique mix of which the people of Strasbourg are proud of, and a very specific identity unique in France.

Ever since history, people have been fighting over the strategically located city of Strasbourg on the Rhine River. Originally founded by the Romans (12 BC) as a military camp to protect the border, ​ it was then taken by the Alemanis in 355 AD for just two years, destroyed by Atilla the Hun (451), reconstructed by the Franks (496), passed under Louis the German (870) before it gained more freedom (1332), and got annexed by the French Louis XIV (1681). Strasbourg, literally the castle on the street, remained French for 190 years and many of today’s landmarks were erected (the citadel, the Vauban dam, the opera house, the new hospital, the palace Rohan, the Kleber square, the astronomical clock…). However, 1871 was a setback for Strasbourg that got partially destroyed by the Prussians who took over the city very easily with their modern artillery. Strasbourg became the German urbanization example in the ​​​Wilhelmien style (inspired by the French Haussmannian style) with its modern infrastructures, wide boulevards, luxurious private homes, landscaping, large and active imperial library, national theatre on ​Kaiserplatz (today’s Place de la République), and the Emperor’s Palace (today’s Palais du Rhin). If the German-influenced buildings can be seen all over the city, the Neustadt district (or “new city”) showcases this massive and austere Prussian architectural style maybe more than any other district in town. After losing World War I, the Germans lost Strasbourg in 1918, but only for a few years: in 1940, Adolf Hitler annexed the whole region of Alsace to Germany. Men from Strasbourg were forced to fight on the German side and often sent on the Russian frontline to try and prevent them from resisting on the French side. At the end of World War II, Strasbourg was returned to France to which it still belongs today.

Inside the Vauban Dam, that used to defend Strasbourg from the Germans, France

With changing flag four times over 74 years between France and Germany, and needing a strong symbol to build a European union after WWII, Strasbourg was the obvious choice to host the Council of Europe, the European Court of Human Rights and the European Parliament. Inhabitants are attached to these institutions representing the friendship between countries, and more specifically between France and Germany. 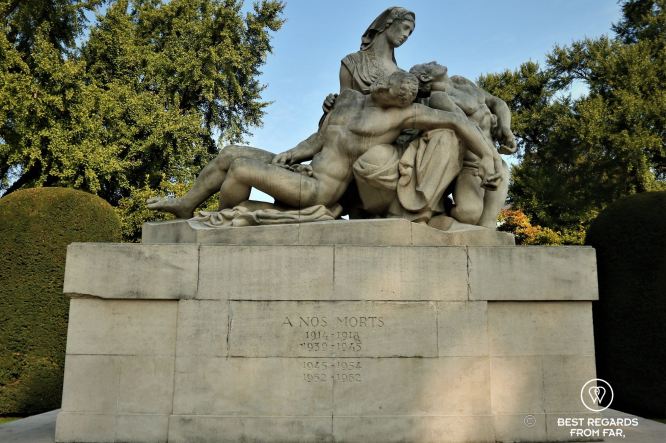 War memorial (the mother with her two sons who died on the German and French sides symbolizing respect for both nations), Jardin de la Place de la République, Strasbourg, France

5. Can you speak Alsatian?

In such a context with so many flag changes, inhabitants needed to hold on to their unique identity. This is why Alsatian may be one of the strongest regional languages in France.

Alsatian is a German dialect mostly spoken by older people in Strasbourg today. It is proudly taught at schools in the region as an option to try and prevent its decline among young generations. If you want to take a closer look, pay attention to the street signs: they are all written in Alsatian with their French translation. It is a perfect way of testing your Alsatian vocabulary as they often refer to crafts that used to be carried out in the street: ​Muenzgass (Coin Street) refers to the coin makers, Spitzegass (Lace Street) to the beautiful fabrics crafted there, Schildgass to the shield the family of knights living in this street used to hang at its windows, Schifflitstade to the bargemen working there, Kaufhusgass to the customs located there, Muenschterplatz (Cathedral Square) to the cathedral… 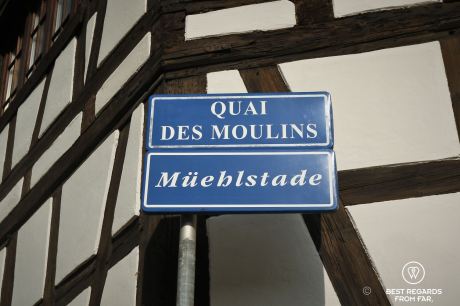 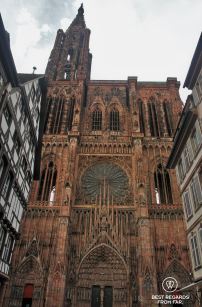 Stroll the streets and try to picture what life was like in the cute city center of Strasbourg!

Pin it to discover Starsbourg through the eyes of a local later! 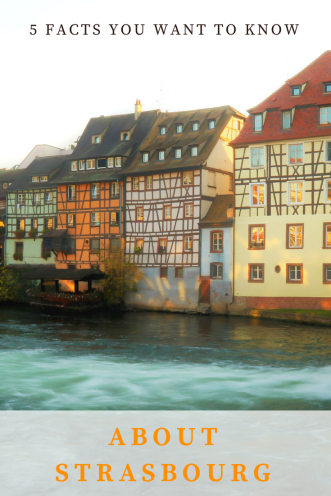 Pin it to learn 5 fun facts about Strasbourg later!

More in Strasbourg, click on one of the images below to be directed to another illuminating article!

Or more in France: 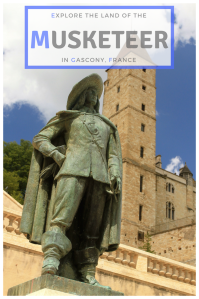 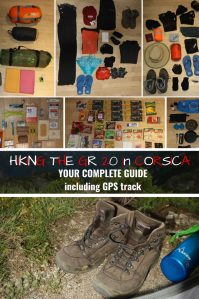 9 thoughts on “5 insider’s fun facts about Strasbourg that you probably did not know about!”