I am steering the rental car around the bend on a curvy and hilly road in the idyllic landscape of the Hluhluwe-Imfolozi game reserve at a rough 25 kilometres per hour. The ideal speed to spot some wildlife on this self-drive safari is also well adapted to stop abruptly! This time it’s not one of the many dung beetles or tortoises crossing. A massive male elephant blocks the road about 30 meters in front of me. I swallow as I see how the elephant stares at me motionless. I try to reverse to only find cars behind me blocking me. The elephant gets a bit closer; I hold my breath. He sways his trunk from the left to the right, flaps his ears, sets one more step in my direction before turning his back at me and deciding to take a bath in the river!

In this series of five articles we feature the big 5 – Africa’s most dangerous mammals to encounter in the wild, in this article you will learn more about elephants!

Did you know that there are 3 elephant species? 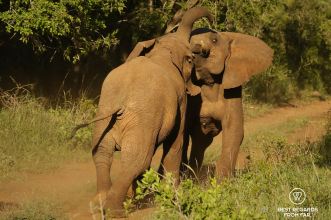 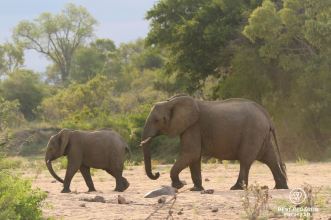 Where to find African elephants in the wild [habitat]

How many African elephants are there left in the wild?

While in 1900 there were still an estimated 12 million African bush elephants roaming around, their numbers today have dropped down to about 350,000 – a decrease of 97% in just over a century! A total estimated between 130,000 and 293,000 (the exact number is hard to determine as elephants move freely across the borders with neighbouring countries) of them live in Botswana. They fled poaching hotspots in other African countries with more civil unrest and less protection. For years Botswana has been considered a safe haven for elephants due to their zero tolerance towards poachers. However, since 2014, poaching has increased by more than 500% with an estimated 400 elephants slaughtered yearly. The Covid-19 pandemic worsens poaching heavily due to the absence of tourists patrolling the parks, the loss of tourism money that pays anti-poaching units and the rise of unemployment of local communities. This is becoming alarming for the world’s elephant population: the African bush elephants is indicated as vulnerable on the IUCN Red List of endangered species. 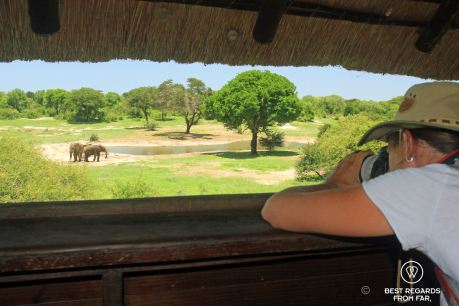 How tall is an elephant?

An African bush elephant bull can almost reach up to 4 metres (13 feet) at shoulder but 3.2 metres tall is considered the average while cows (females) average a shoulder height of 2.2 to 2.6 metres (7.2 to 8.5 feet).

How large are elephant herds?

Elephant herd sizes vary greatly from their type of habitat, climate and family size. A herd contains females and their young ones and can be anywhere between 8 to up to 100 individuals. The herd is led by the matriarch, the oldest and tallest female who makes the decision of where to go for food and water. She leads the multi-generational herd for years. Bulls come in and out when they are ready to mate and often live a solitary life or live in small herds with other bulls.

How do elephants reproduce and take care of their little ones?

African bush elephants become sexually mature when they are 12 to 15 years old. Female elephants get into oestrus (heat) for a few days a year. Bulls smell this and they are never far from each other during this time of the year, often during the rainy season. The female mates several times with the bull that will stay with her for a few days to fight other bulls. She often chooses an older, strong bull to reproduce. As the bull plays no role in raising his offspring he wanders off. The gestation period last for 22 months, the longest in the animal kingdom. While giving birth, often to one offspring, family members of the herd get very excited and they take care of the mother and they help her raising her young one. Sometimes, elephants even nurture offspring that is not their own. The baby elephant stays in the herd and in case it is a male, it will wander off when puberty kicks in at the age of 13. 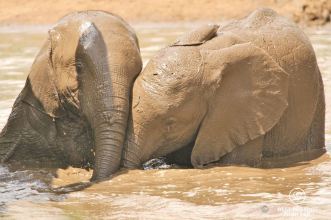 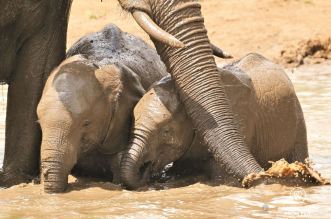 Elephants live up to 70 years in the wild.

Elephants eat between 100 to 300 kilograms (220 to 660 pounds) of grass, roots, fruits and bark per day. When you spot them, chances are they will be eating! They are always on the move while foraging. Elephants sometimes use their tusks to dig for food and to strip bark from trees. An elephant herd passage is easy to spot as the vegetation takes a serious hit – so serious that this leads to environmental concerns in Botswana.

Elephants can drink up to 200 litres (53 gallons) of water per day.

Elephants absolutely love water. They can only go four days without it. When at a waterhole they often take up a few litres with their trunk to then splash it over themselves to stay cool. They use their trunks to suck the water up to then put it in their mouth to drink and they regularly bathe.

Did you know elephants can communicate through their feet?

Apart from the characteristic trumpeting sounds that elephants make when they are very excited, mad, surprised or scared, elephants communicate at different levels. They have their private communication channel of infrasound, or low-frequency sounds that they can communicate through for up to 10 kilometres (6.2 miles). Actually, this infrasound can even be picked up through their feet about 100 kilometres (62 miles) away to help them find each other.

Elephants use their body language as well to communicate with each other and with other species. To show they are not happy, their tail points up, or is stiff in one direction, their eyes get wide, they make flapping sounds with their ears while rolling their head backwards, they smack their trunk against the soil or they trumpet.

Signs that the elephant is relaxed look more like having their eyes half closed, a wanking tail and caressing of other elephants of the herd with its trunk. 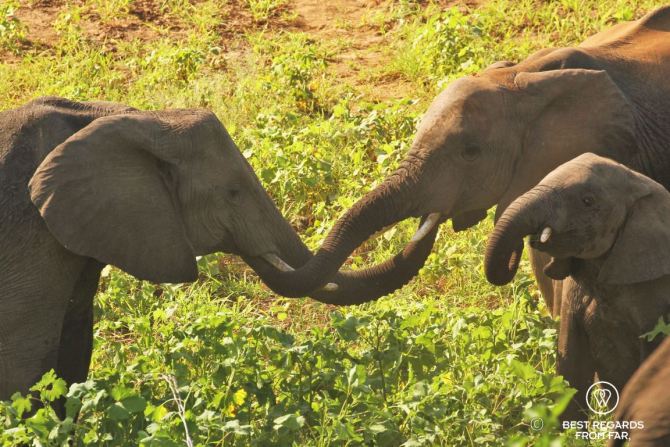 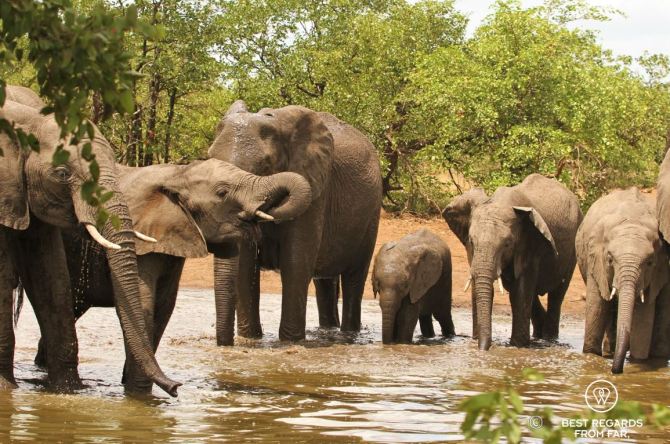 Note: All photographs were taken in the wild in South Africa and are available in high definition upon request. All rights reserved. 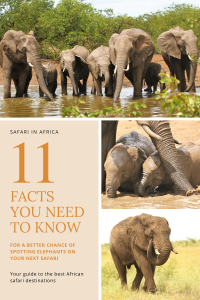