“Hold on tight! It is going to be a little bit bumpy”, our guide Christeen Grant, experienced mountain guide passionate by the Drakensberg, calmly announces. She confidently steers the wheel of the extended Land Rover Defender which roaring engine is operating at its maximum capacity. The 4×4 steadily crawls forward on the steep rocky road winding up towards the Kingdom in the Sky. We are about to enter Lesotho for a multiple day horseback riding adventure although the real adventure has already started at the foot of the legendary Sani Pass in the Drakensberg Mountains of South Africa. 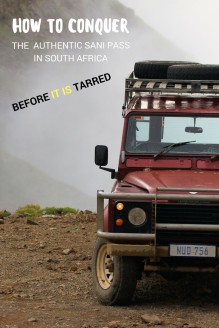 Volcanic stones showing a fast cool down on the Sani Pass, South Africa

A lizard on the Sani Pass, South Africa

Actually, the Drakensberg is not a mountain chain so much as an escarpement. Here, the geology of the Earth is an open book: 450-million-year-old remains dating back to the mother continent Pangaea, and 180-million-year-old basalt from when Africa separated from Gondwana form the backbone, continental divide, and water shed of all of Southern Africa.

The scenic and rugged valleys of the Drakensberg are known to have been inhabited by the Bushmen about 8,000 years ago. These nomadic hunters and gatherers painted scenes from their daily lives on the sandstone formations dotting the Drakensberg with over 500 open air art galleries of significant cultural value. In the summer, Bushmen followed the safe eland paths to look for wild animals in the mountains of today’s Lesotho.

Later, Bantus and Europeans walked these pathes to trade wheat, pees, and high-quality Mohair wool produced by the Angora goats roaming Lesotho against manufacturing goods. They were often accompanied by donkeys or horses speeding up the erosion and destroying the eland pathes. In the late 1800’s, a brave Basotho* chief by the name of Rafolasani came down the steep and hazardous trail to trade for wood, salt and cooking pots. To avoid accidents, a stony bridle path named after the chief was built and completed in 1910: the Sani Pass. “Look at that building here”, Christeen says after avoiding a huge pothole filled with water. “These are the remains of an old trading post and lodge. In the front, there was a field for the animals to graze and rest.” The way back home up the pass could take up to a few weeks.

It is only in the 1960’s that the gravel road was constructed. The engine keeps roaring as we pass by a heavily loaded truck that has slid into the ditch. The driver and his companions are silently waiting for help to unload their goods and get the truck back on the road. Sliding on the other side of the pass would have been lethal…

As clouds vanish, Christeen is focused on the road and its surroundings. She abruptly stops: “Rock dassies” she pronounces softly as she points out to a whole family of little marmot-like furry animals laying on the rocks that are warming up fast as the sun starts to break through. Taking us from 1,500 metres of elevation up to 3,000 metres, many different ecosystems can be observed along the track.

With its culminating 2,865 metres, Sani Pass is the highest pass of South Africa and requires some serious driving experience. Passing by yellow signs and bright orange tape, we can only notice the progress of the road works. Several kilometres have been paved already, and the goal is to pave the whole pass up to Lesotho. If this might help Basotho people have a faster access to South Africa and its job market, it is bound to be an environmental disaster, and most likely an engineering disaster as well. In the meantime, the pass is deteriorating fast: with the tender to build and design the road awarded, the gravel road maintenance budget was cut off. Beyond the extremely bumpy dirt road, the steep gradients and narrow passages make it very unlikely that a decent paved road can be built and maintained here. And we are just starting the last section comprised of seven hairpin bends. Christeen was not kidding: less thant a mountain pass, the Sani Pass is more like climbing straight up a cliff face!

As we make it to the top and pass the border post, we notice that the paved road has already been completed on the plateau in Lesotho. As the Land Rover slowly makes its way up on the smooth asphalt, road signs call for carefulness: “use caution when snow and ice”. How ironic… Now that the dirt road has been tarred, caution is merely useless in icy conditions, as the road is so slippery that it cannot be driven. The former dirt road on which people drove slower and had more traction was much safer and usable all year round.

Besides the cultural aspect of the Bushmen paintings, this area is unique for its geology, its stunning beauty and abundant flora and fauna of which 10% is endemic. For these reasons, this outdoor paradise has become a UNESCO World Heritage site. One can only wonder how this status can be maintained despite this absurd construction project. Make sure you make it up Sani Pass into the Kingdom in the Sky fast!

* A little bit of tricky vocabulary from Lesotho:

For more in Lesotho, click on the images below: