The start of the engine overpowers the shrilling cicadas. Nicolas Ponzone steers his Zodiac boat out of the picturesque harbour of Niel, with its traditional colourful fishing pointus. Nicolas is a treasure hunter! A professional diver, he has a passion for history and discovering and preserving archaeological finds. With his organization AREVPAM, Nicolas has created some interesting snorkelling trails, and we are on our way to discover a 2000-year-old treasure from a sunken ship… 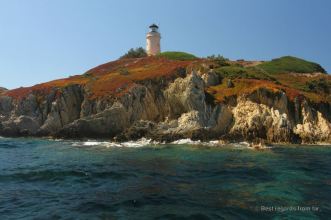 We are getting closer to our adventure, and we are eager to cool down in the water. Nicolas throws the anchor and points towards a few yellow buoys. “This is one of the archaeological snorkelling trails we set up in this area”, he explains. More than 2000 years ago, a Roman ship referred to as La Madrague de Giens sunk nearby. Coming from Naples, Italy, it was heavily loaded with hundreds of high-quality amphorae filled with good wine. Too big to land on the pier of the close-by Roman fortified harbour of Olbia, the traitorous waters of the Mediterranean Sea swallowed the boat and its precious load.

We put on our fins, tighten our masks, and after zipping up our wetsuits, we plunge into the calm crystal-clear waters of the sea.

Swimming towards a yellow buoy, we see the first underwater-panel. Several of them are placed to describe history and marine life, making the trail accessible for independent snorkellers.

At about six-metre deep, a few dozens of amphorae lie on the sandy bottom. I take a deep breath to get closer. An inquisitive fish peeps out of an amphora to take a look at what I am doing. Their state of preservation is remarkable. 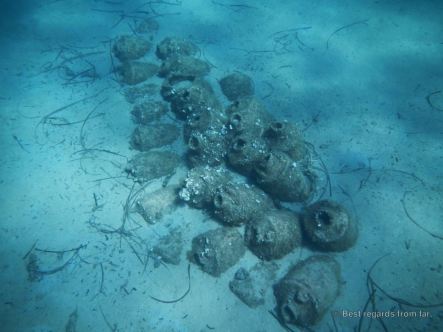 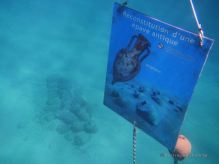 Back at the surface, I am surprised we are the only ones snorkelling on these more than 2000-year-old remains. “People are simply not aware of what these archaeological snorkelling paths have to offer”, Nicolas explains. “Most spend their day at the beach not knowing that at a stone’s throw away, the bottom of the sea offers great diving and snorkelling experiences. Let me show you something else”.

As we are circumnavigating the peninsula with its rough cliffs rising out of the translucent water, we spot hikers, kayakers and divers. The peninsula is a fantastic adventure ground, with secret beaches, caves, wrecks, ruins and remains from World War II.

A good 15-minute later, after a speedy boat ride, we anchor close to the Roman walls of Olbia. Today, it is more renowned as one of the best windsurfing and kitesurfing spots: L’Amanarre. We look at the crowd on the beach. Nicolas points out to a few big stones sticking out of the water. “Let’s take a look at them with our masks.” Swimming closely above the rocks and looking at the underwater information signs, we realize we are following the pier used by the Romans to load and unload boats. The way the stones were mounted together by lead is still visible at certain places.

The ruins of Olbia with the pier slightly sticking out of the water, French Riviera 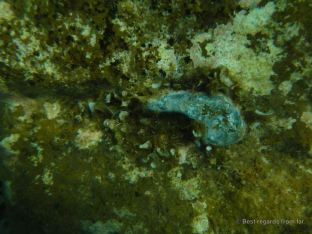 Lead that used to hold the Roman stones together, Olbia, French Riviera

It is really fantastic to discover these sites which can easily be combined with tanning on the beach, SUP or wind-surfing, kayaking and diving to take and even closer look of what the bottom of the Mediterranean keeps a secret for most of us.