“You are going to Preah Vihear?!” All by yourselves? The temple bordering neighbouring Thailand, all the way up in the Dângrêk Mountains?? Wow!… Do you know the road?” With a grin on our faces and small backpacks ready, we nod in reply to the young friendly Cambodian lady who looks slightly concerned on the small parking lot of our hotel in Siem Reap. She takes another look at us and studies the 120cc scooter we have just rented. With a frown she adds: “Whatever you do once you arrive at its foot, do not drive your scooter up there by yourselves; it is way too steep there!! Be safe and enjoy!”
Indeed, exploring Preah Vihear is a true challenge: it is remote, not connected to any form of efficient public transport, it is hardly visited by tourists nor locals. Due to military tensions between the Cambodian and Thai armies in 2008 who both claimed its grounds, people are still cautious as whether or not to roam these splendid temple grounds. Still, Preah Vihear is settled in the most dramatic setting of all temples built by the powerful Khmers, on top of a majestic cliff dominating the plains of Northern Cambodia by more than 500 metres. All the more reasons for us to explore the ancient stairways, courtyards and sanctuaries organised along an 800-metre long axis defining the off the beaten path temple complex.

Preah Vihear has always been a mysterious place, and played a major role in the Khmer history. Although its foundations date back to the 9th century, the temple was built mainly under the supervision of King Suryavarman I and II, the great builders of the Angkor temple complex in the 11th and 12th centuries and dedicated to the Hindu deity Shiva. The well preserved Preah Vihear is an outstanding masterpiece of Khmer architecture. Famous for its stone carvings, its uniqueness resides in its unusual setting placing the temple in harmony with its surrounding landscape violating the building guidelines of the time. Still, like Angkor Wat, Preah Vihear represents the home of the Gods with the sacred Mount Meru. Over time, as the rest of the empire, the temple was converted from Hinduism to Buddhism. 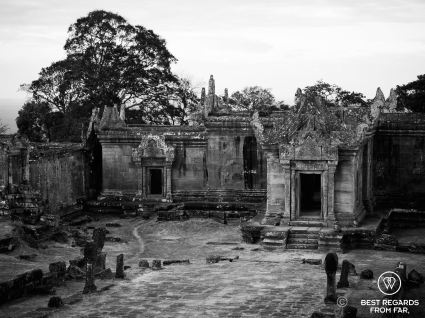 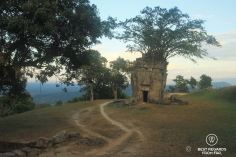 “I think we should fuel up at the next village!” I scream through my helmet in an attempt to overpower the engine of our scooter that, given the sound it makes, is clearly working to its maximum capacity. We are almost halfway on route 67, since we have left the parking lot in Siem Reap roughly 2 hours ago and we have covered about 100 kilometres. We have been passing by small villages, slaloming around deep potholes and many butterflies from the surrounding silk farms, avoiding roaming chickens in the almost unbearable heat in which the freshly harvested tarot roots dry on the burning asphalt strengthening its characteristic odour. As we stop at a local gas station, two girls run inside the house attached to fetch their brothers. They all observe us and giggle as we fuel up our scooter. They enthusiastically wave us a goodbye when we jump on the hot saddle and hit the gas for the last stretch.

The landscape changes slowly and mountains detach themselves against the cloudless sky. Another two hours later, a woman at the barren ticket booth asks: “You need moto taxi?!” A few guys on 110cc semi-automatic Honda’s wave at us. She shrugs when we politely decline and, followed by the moto taxi drivers, start driving up the road that has been created in 2003 to provide access to the temple from the Cambodian side. A geographically easier way of accessing the temple without the immensely steep climb up, would be through Thailand but since 2015 the access from the neighbouring country has been forbidden. When the French left Cambodia in 1954, Thailand immediately claimed the temple. Cambodia protested and years of political tension followed until the International Court of Justice in The Hague arbitrated in favour of Cambodia in 1962, based on maps drawn by the French in the early 20th century. Shortly after, the Cambodian civil war broke out and Preah Vihear appeared to be a strategic point for the Khmer Rouges who eventually conquered it. Years after the fall of Pol Pot, the Khmer Rouge fighters were still sheltering on these heights until their final surrendering in 1998. The temple immediately opened for visitors and became a World Heritage Site within 10 years thanks to the efforts made by both Thailand and Cambodia. This distinction revived nationalistic claims leading to casualties and injured soldiers on both sides in 2008 and 2009. After the ICJ intervened again, Thai security forces had to leave and the access from Thailand has been closed since 2015, making the only way to visit the temple this steep road along the cliff our scooter is struggling with.

The views get more stunning by the metre. We are escorted by two moto-taxis which drivers keep pointing at their passenger’s seat, screaming “Moto-taxi!” (a nice change from the usual “tuk-tuk!”). Gaining altitude fast, we assume that we must almost be at the top and stopping the scooter will make us loose the speed we desperately need to make it. On paper, our 120cc motorbike should conquer the slope as taxi drivers ride 110cc’s to carry visitors. Now, we do have backpacks with heavy camera gear, but I estimate that the additional 10cc’s should make up for that. So far so good! Another 180 degree turn and my heart skips a beat! In front of me, the road seems to go up vertically, and I am not sure if we will be able to stay on the saddle in an attempt to get up there. Catching my thought, Claire jumps off, and with the gas full open I continue. In a reflex, I shuffle and lean forward as much as possible, terrified that the front wheel will detach from the road and flip the scooter in a backward salto. I am getting closer to the ridge while the scooter is losing speed rapidly. “It’s not going to make it!!” I fearfully shriek. I quickly steer to the left and then to the right to lower the vertical gradient in a low speed slalom taking the whole width of the barren narrow asphalt road. I feel the adrenaline pumping when our scooter crawls over the edge at maybe only 5 km/h and reaches a flat. “Wow! That was close!” I yell looking at Claire’s white face. I realise that being at the back must have been hell, the reason why I did not want to end up at the rear end of a moto taxi. Our escort makes it to the top too with a mix of admiration and frustration in their eyes. A few officials look surprised when we park our scooter after a few hundreds of bumpy but flat metres. They point at us and the scooter. They talk in Cambodian, look at each other and at us again, laughing and shaking their heads while applauding. 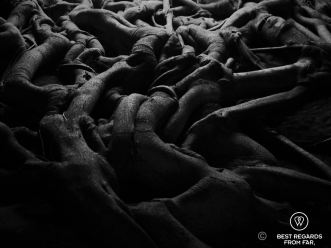 The recognisable blue UN flag proudly flaps in the wind when we approach the site on foot. It is late afternoon, and we seem to be the only visitors. We walk the long metres of the ancient causeway leading to the steps of the temple itself. Like Angkor Wat the temple contains five gopuras (the towers symbolising the sacred mountains) that are surrounded by steps and which are never visible at the same time. To go from the one to the next, we enter different gateways all carved with apsaras and animals. The second gopura reveals one if its masterpieces: a depiction of the “Churning of the Sea of Milk” a bas relief that can be found in Angkor Wat as well, showing an important occurrence in history and religion. The setting sun plays with the shadows on the 3rd tower that is surrounded by two former libraries and courtyards through which we stroll, taking in the beauty of the well preserved stone carvings before making our way to the last two towers. A few military guys keep an eye on us and only one more visitor is contemplating the site when we approach the vertical cliff.

The Churning of the Sea of Milk, Preah Vihear, Cambodia

View on Cambodia from the temple Preah Vihear, Cambodia

According to the map, there is supposed to be an ancient staircase descending the mountain and connecting it to the Cambodian plain. The path is hardly visible and we remain silent for a while commemorating the thousands of Cambodian refugees who were pushed from the cliff by Thai officials in 1979.

The Khmer Rouges were still occupying the area. A rough 3000 innocent lives were lost in this expulsion of refugees that Thailand did not longer want to pay for. Many of them fell down and many more died in the mine fields once they made it down along the ancient staircase. The ones who survived the descent and 5 kilometres of mine fields were then helped by the Vietnamese, who had freed the country of the Khmer Rouges. We silently overlook the plains of Cambodia from this sacred site that has been the scene of so much bloodshed. It contrasts with today’s peacefulness.

We explore the site a bit more until we are politely asked to leave. Indeed, the sun is about to set and we need to make it safe from the slope. When I slowly steer the scooter down, this time using its breaks to their full potential, I wonder about all the lives lost on this mountain. Goosebumps cover my skin when I switch on the headlights and roll into the night in search for a hotel in a village 20 kilometres from here.

Exploring these grounds has left a deeper impression on me than any other temple visit in this country. Is it the history, the way the stones merge with nature, the fact that we were the only visitors, the adventurous ride, a combination of this all? Our efforts and braveness have been rewarded. Another rush of adrenaline spreads in my limbs when I realise our adventure is not over. Tomorrow, we will try to reach an even more remote area where hardly anyone comes. After a few hours of sleep we will be on our way to explore an even bigger and more remote temple swallowed by thick jungle. 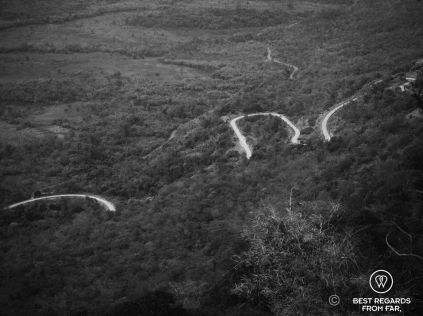