Even if you have read our shrine for dummies article which gives a basic understanding of these places of worship with their do’s and don’ts, you can still be a bit puzzled at times wondering if you find yourself in a shrine or a temple in Japan. Here are a few tips to easily distinguish them and make you temple-shrine-confident! 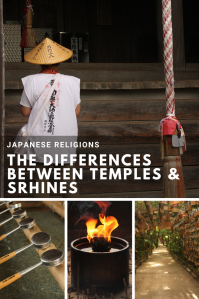 A few of the toris at Fushimi Inrari, Kyoto

The washing ritual starts here, at the chozuya. 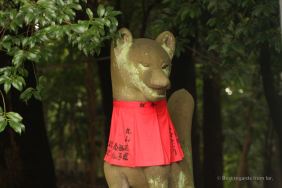 Fox guardian outside the gates to the Inari Shrine, Kyoto 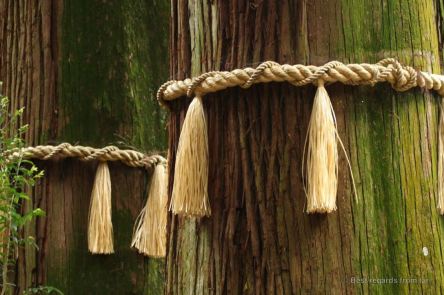 Jizo, protecting travelers, by a temple on Shikoku Island 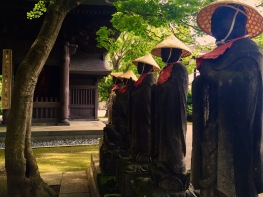 The Daikaku-ji, a temple in Sapporo

A henro, or pilgrim walking the 88 temples of Shikoku, wearing the the traditional hat and white shirt. 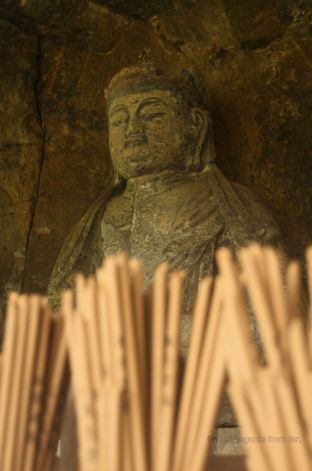 Detail of the Furuzono stone Buddhas: the Dainichi Nyorai is considered as the finest stone Buddha statue in Japan, 12th century 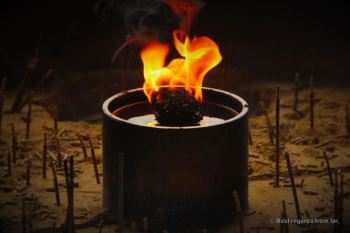 Incense burning in a temple in Nara. 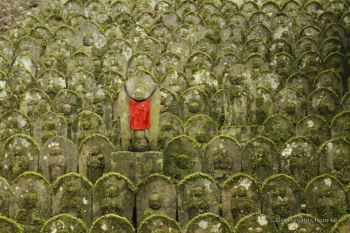 Whether at a shrine or a temple, it is difficult for a foreigner to make sense of the various religious charms, from wooden boards to delicately woven fabric bags, or paper strips. Every temple or shrine has a section where one can buy offerings related to the deity enshrined (hotoke for Buddhism or kami for Shintoism) which are clearly a big part of religion in Japan.

An ema (絵馬) is a Japanese prayer or whishing board. It is a small wooden board on which one writes one’s wishes or prayers on its back side. They are hung so that the spirit enshrined at that specific place of worship can read it to make it come true.

Most ema are pentagonal with some rectangular ones. Specific places of worship offer unique shapes. For instance, at Kawai Shrine in Kyoto, mirror-shaped ema were drawn by women to pray for an easy delivery, children’s healthy growth, matchmaking, or more frequently for their beauty.

Whichever shape it takes, an ema always contains a picture (e stands for picture, and ma for horse). Historically, worshippers used to bring a horse when their wish came true. Not everyone could afford it, and horses got replaced by their image on a wooden board, that has evolved into many different graphics.

It is OK to bring an ema home as long as it is not written. Then, make sure to keep it somewhere clean, bright, and above eye level.

The Japanese often write ema before a school exam, an important interview, or to find love… 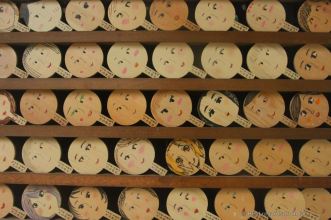 Ema, used to write your wishes at the shrine 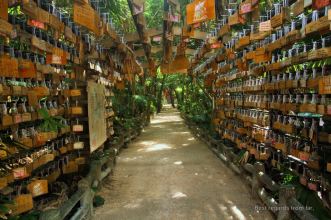 Aoshima Shrine where people pray for a good marriage.

An omamori (お守り) is an amulet that believers buy at religious sites to benefit from the protection of the enshrined spirits, most often coming in a small silk bag.

About a millennium ago when temples and shrines were growing in influence in Japan, their religious representants traveled far to gain worshippers. As traveling was not that easy back then, many of these would never see the place of worship, and the omamori was the talisman to provide them the protection of the enshrined deity.

The tradition has been maintained and adapted to modern life. Each omamori can bring different benefits and should be placed in relevant locations. Here are a few examples:

The luck and protection of an omamori last for a year. Throwing it away is not done. After a year, believers are to bring the old omamori back to where they got it, and buy a new one; or keep it until they might visit the shrine or temple again. If it is difficult, it is burnt at home, wrapped with a pinch of salt – to purify evil spirits – in a clean white paper.

Should you acquire a bag-type omamori, never open the bag! The bag merely protects the holy piece of wood or paper that was blessed by the enshrined deity. Opening and watching inside it does not only cancel its benefits, but shows great disrespect to the god. 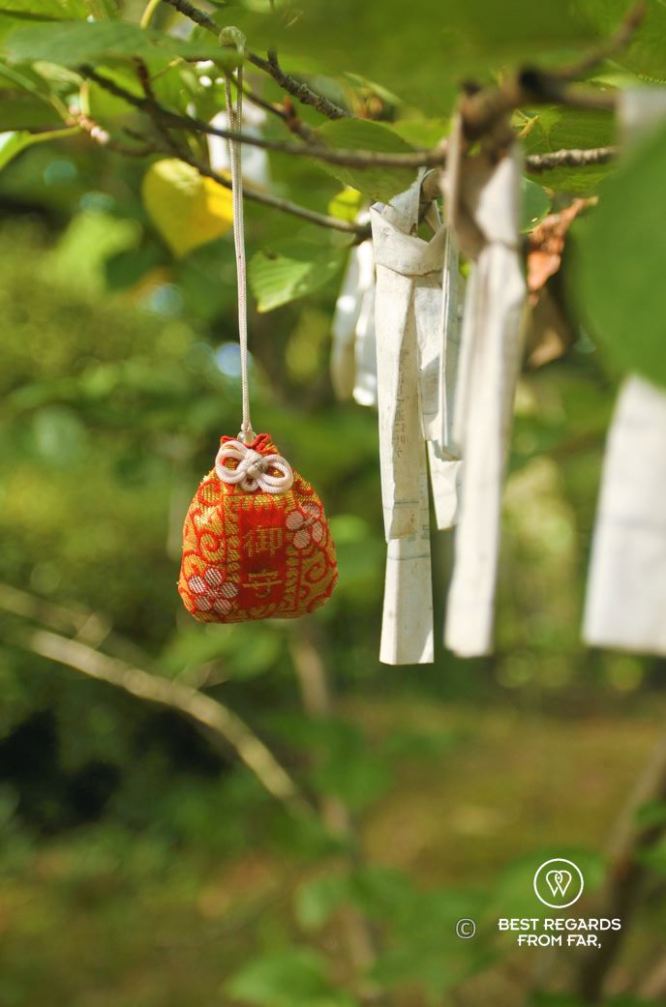 An omikuji (おみくじ) is a fortune written on a slip of paper. With a specific topic in mind, draw a folded paper from a box or a stick, depending on the place of worship, after dropping a few coins. This refers to a number corresponding to an omikuji or a drawer containing the omikuji one has to pick. The text written provides insights into the topic you had in mind. If it is good news, keep it. If it is bad news, tie your omikuji onto a string at the place of worship: the enshrined spirit will sort things out for you.

Be careful, if your omikuji is bad news, do not draw others until your fortune gets better. As the hotoke or kami is talking to you through the omikuji, you will be disrespectful or doubting the deity.

It is very common for the Japanese to draw an omikuji on New Year’s Day or when visiting a temple or shrine, after showing respect to the deity. 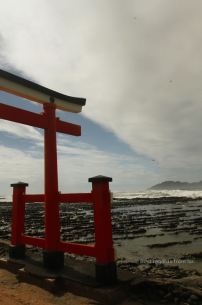 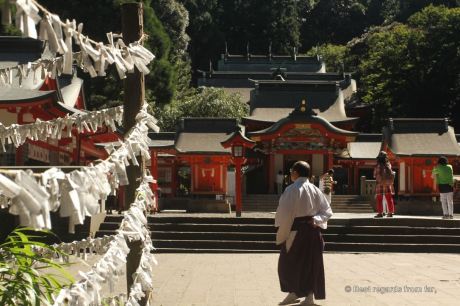 Omikuji hung by a shrine along the road by Ebino Kogen, Japan.

Are the Japanese Buddhist or Shinto?

Actually, most Japanese do not consider themselves religious (62% of them according to a 2015 survey) and still, regularly visit shrines and temples, practicing both Shintoism and Buddhism. Generally speaking, they would visit Shinto shrines for earthly matters, praying for success in life or business for instance, and Buddhist temples for more spiritual ones, praying for one’s ancestors.

With more than 80,000 shrines and temples and millions of yearly visitors, ironically, Japan considers itself as one of the least religious countries in the world.

Whether out of religious beliefs, sightseeing interests, or long-lasting traditions, whether they are temples or shrines, these places of worship are an integrant part of daily Japanese life, providing a lively yet serene environment.

For more related articles, click on the images below: 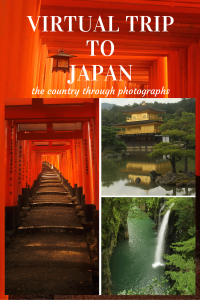 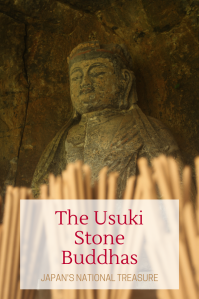 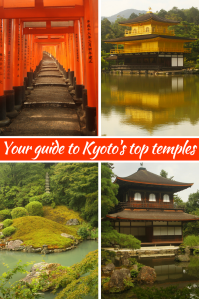 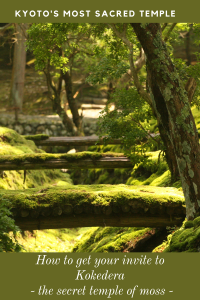 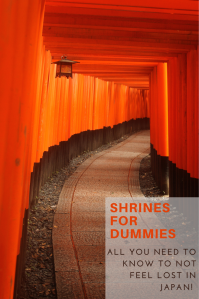