South East Asia with its emblematic and exotic landscapes has long seduced Hollywood: Angkor Wat, Cambodia in Tomb Raider; Koh Phi Phi, Thailand in The Beach; or the karst formations of Phang Nga bay, Thailand in the 1974-James Bond movie The man with the golden gun. If the sites are stunning, visiting them can often be disappointing as hordes of tourists do the same! As a James Bond fan, I was torn… to resolve my internal conflict, exceptionally, we were in for a movie night, watching The man with the golden gun on the roof of our hotel in Phang Nga, surrounded by karst formations. Seeing James Bond flying over these jungle-covered rock formations rising out of the turquoise waters and duelling against the villain Scaramanga on the beach of what is now commonly known as the James Bond island, we decided to hop on a tour the next day. 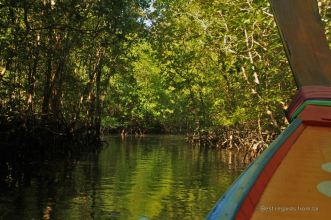 Navigating through the mangrove to the James Bond island, Phang Nga bay, Thailand

Embarking from the dock south of the laid-back Phang Nga town that has been preserved from the mass tourism that has spread along the Thai coast, we are setting off on the colourful wooden long tail boat to explore the bay. The small vessel makes its way through the mangrove in the Ao Phang-Nga Marine National Park. In this buffer between sea and land that acts as a nursery for many species, we observe a few birds, a massive sea eagle and when the channels through the mangrove get narrower, macaque monkeys jump over our boat from tree to tree. We are exploring only a portion of Thailand’s largest area of original primary mangrove forest, opening up on the majestic Phang Nga bay. 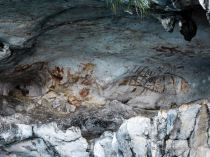 As the waterway opens into the Adaman Sea, karst islands appear more clearly. There are about forty of them and each has a different vibe. Some house caves that can be explored with delicate stalagmites and stalactites and paintings as old as ten thousand years, showcasing the lives of cave dwellers who inhabited the area after the last Ice Age. Others were drilled by the sea that created tunnels through which our boatman skilfully navigates. A few shelter natural lagoons with emerald green waters surrounded by cliff faces covered in limestone scrub forest where roots of plants hang on to just a few inches of rock or soil. On a handful, idyllic tropical beaches can be enjoyed. 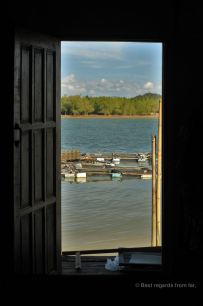 Koh Panyee is one of the rare islands that is inhabited. About 400 Muslim families live in houses on stilts. The foundations of only a few buildings are on solid ground, such as the imposing mosque with its golden domes. On the other hand, the surprising soccer pitch is a floating platform. Thanks to the excellent results of the local youth team, the original pitch made of planks of wood connecting fish cages was upgraded to a professional-looking platform. Strolling the narrow streets of the village, smiling women wearing headscarves sell handicrafts and dried fish that most likely their husband caught or farmed in one of the many two-by-five metre fish farms anchored by the houses. The shallow bay full of plankton and of warmer temperature is a nursery for many marine species before they hit the deeper waters, making it an ideal location for the fishermen’s village. 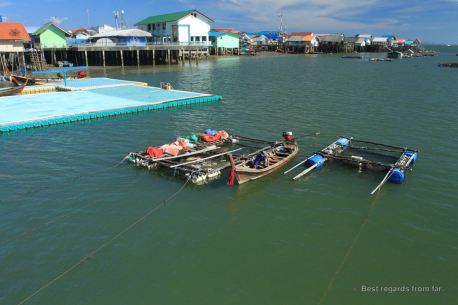 As we are navigating between islands, I catch a glimpse of a red traditional Chinese boat sailing among the karst islands. It looks like it is coming straight out of the James Bond movie! I’m wondering if Nick Nack, Scaramanga’s midget servant, is hiding on this copy of the boat with which James Bond flees the exploding island in the closing scene.

Shortly after, we land on a small and quiet beach on Khao Ta Poo island, commonly known as James Bond island. Our toothless yet very smiley captain stops the engine and points the way. We jump on the beach and walk up a few steps. The iconic view is framed by trees right in front of us. Like a nail, the limestone rock rises straight up from the sea and seems to be barely balanced on its conical base which is clearly shaped by tidal erosion. The peculiar shape of this island is explained by water level variations over thousands of years combined with tectonic movements. As I peep through the trees, I see the beach of the duel. We run down and arrive on the small beach. And we are not alone… literally thousands of tourists are taking selfies and photos, buying coffees, snacks or souvenirs. On the other side of the island, big boats are anchored and people are brought in from the boats onto the island on massive long tail boats, groups by groups in an organized chaos. We turn back, walk back to our boat and swim by the beach. 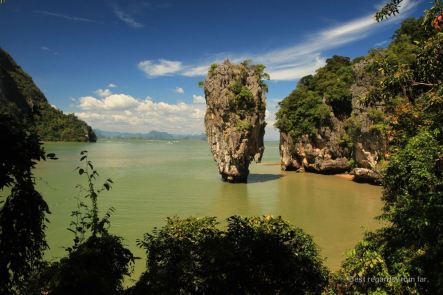 As the sun sets, we are navigating on the watercourses surrounded by mangrove on our way back to Phang Nga, while most tourists are already back in Phuket or Krabi. I have mixed feelings. The area is superb, but I am puzzled by the amount of tourists visiting the James Bond island, almost half a century after the movie was released! We cherry-picked a tour leaving from Phang Nga that was mostly off the beaten path, making the experience memorable. Some of the most stunning islands like Khao Ta Poo or Koh Kong were completely spoiled by the way the masses of tourists are handled, but the bay has so much more to offer! 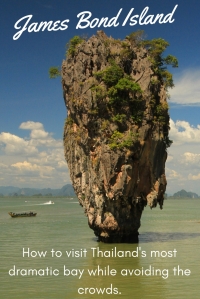 9 thoughts on “The James Bond island: to go or not to go?”

Making our way South through Finland and enjoying the beautiful fall colors from our beautiful log house in Muotka and the amazing surrounding mountain biking trails! Tough and cold conditions, but our private sauna in our very charming chalet is exactly what is needed after a day in the outdoors of Finnish Lapland!
After this amazing and demanding adventure reaching the REAL North Cape (see previous post), we crossed into Finland to enjoy the beautiful ruska (peak fall foliage!). Trees are getting their true colours and the ground covered in wild berry bushes has turned into a beautiful red and orange carpet! Hiking “mount” Omatso the views were just amazing! It is cold though and it is very nice to get warm in our Aurora Cabin in Inari to observe the Northern lights.
And this is still the cliff of the North Cape visitor’s Centre far in the distance in this amazing sunset… from the ACTUAL northernmost point of the European continent! Namely Cape Nordkinn. We made it 🤗🥂🍾 What an expedition though!! A very demanding 53-kilometre hike including a night in this remote area in this ice-cold arctic climate, navigating amongst never-ending ankle-twisting fields of boulders! Maybe one of our most difficult and best adventures in Norway rewarded by the Northern Lights… So great we are writing a full article about it for the e-magazine Beyond Boundaries! Lots of photos to share with you guys!!
71° 11′ 08″ N!
71° 10′ 21″ N! Yes we made it to the North Cape, Europe’s most Northern point! 😃 Or… errrm… maybe not?! Hmm studying the map (swipe left) we learnt that what everyone refers to as the North Cape is just a fake! Great location for a visitor’s centre. Don’t be fooled! Next post we will show you what the real North Cape looks like… stay tuned! What about you, have you ever made it there that far North?
Packing up on some much needed calories before our hardcore adventures to the real North Cape and Cape Nordkinn (the REAL most Northern point of continental Europe). Simply enjoying the excellent local seafood of the gateway to the arctic, as Tromsø is nicknamed. Yummy…