“Of course, I found many bombies as a kid!” Ae’s reply sounds so obvious. “Many of my cousins still have metal in their bodies. They can’t really take it out. It’s too dangerous.” Ae is 28. He grew up in the plain of Jars, one of the areas of Laos that was heavily bombed during the secret war: more than half a million US bombing missions took place between 1964 and 1973… On average, one every 8 minutes for 24 hours a day, for 9 years in a row… Laos is the most heavily bombed country per capita in the world.

In the wake of the Vietnam War, non-participating Laos endured a nine-year long secret war.

Northern Laos was bombed by the USA because large areas were controlled by the Pathet Lao (the Lao communist movement).

Southern Laos was bombed by the USA to disrupt the use of the Ho Chi Minh trail, an engineered network of roads, bridges and rivers through Laos and Cambodia to smuggle people and gear from North to South Vietnam (in violation of the Geneva Convention). As the trail was camouflaged from the sky, a very large area was targeted and extensively bombed.

Many different explosives were dropped, including many cluster bombs. Dropped from an aircraft, they open in mid-air and spread hundreds of sub-munitions on the ground. But 10 to 30% of the ones dropped on Laos failed to detonate, leaving an estimated 80 000 000 UXO (Unexploded Ordnance) in the country that are still killing and injuring people, about 40 years after the secret war.

Daily routines put one at risk. Hitting a UXO while farming land and boom! Heating up a UXO hidden in the ground while cooking dinner on a traditional open fire and boom! “The yellow one really looks like a toy” says Ae as he shows us a BLU-3 pineapple munition. The BLU-42 looks like a pétanque ball, a very popular game in Laos. Kids playing in the fields or going to school have been at risk in about a quarter of Lao villages that were contaminated, and they are the victims of almost half of the UXO-related accidents.

“In my village, many people make spoons with the scrap metal”, Ae explains. Of course, scrap metal trading is illegal. But it generates an income that poor villagers can’t turn down, especially when they can’t harvest their whole land because it is contaminated by UXO. With low-quality-$10 metal detectors made in Vietnam, they search for bombies in fields and forests. The precious metals are then turned into aluminium spoons, rice cookers, oil lamps, or tables for the house. The explosive powder is used to go fishing, and ball bearings to go hunting. And often, in the process… boom!

But there is not too much choice when one lives in a contaminated village and is scared of using one’s land. Only the minimum is farmed to not starve. Not enough income can be generated to properly feed one’s family or pay for the education of one’s child. Schools, clinics or sanitation facilities cannot be operated nor built safely until the land is decontaminated.

The tip of a bomb boat, Ban Thabak, Laos 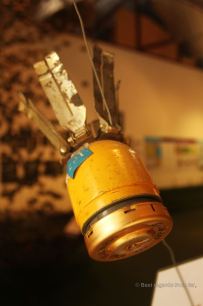 The evidence-based technique has been put in place since 2015 to locate and destroy the UXO. A lot more efficient, this new methodical technique should cut down from a century to a few years the time needed to decontaminate the country. By 2021 all bomb locations should be mapped… 47 years after the end of the secret war…

If UXO-related accidents still happen today, UXO also represents a major blockage to the socio-economic development of Laos that the country will suffer from for many more years to come.

12 thoughts on “The explosive truth about the secret war, Laos”