Fresh basil, peaches, melons, figs, nectarines, tomatoes, lavender, thyme, olives… All these scents enter my nose as we walk through the colourful and authentic market of Cour Lafayette in the city centre of Toulon, along the Côte d’Azur (French Riviera) in Southern France.

Save this pin for later!

Beyond these fantastic smells and the bright colours of locally-grown fresh vegetables and fruits, the friendliness of the locals is striking. Easily exchanging a few words about the RCT (the Rugby Club of Toulon where some of the best players in the world evolve), a joke or an anecdote, it feels like everyone knows each other on this lively market.

Garlic, an essential of the Mediterranean diet, Toulon

Zucchini flowers from the market, Toulon

At the next crossing, freshly brewed mint tea and wood fire overpower these smells, and I sit to taste a piece of cade, a local specialty imported by the Italian immigrants during the 19th century made of chickpea flour, olive oil and water.

This snack is quite filling, and this is precisely what the blue collars working on the shipyards of Toulon needed! Along with the militaries, they formed the main part of the population of Toulon, an important military harbour since Henri IV set its baseline in the late 16th century. The French navy was created a few years later by Richelieu (1639), minister of Louis XIII and established here, creating a whole economy around it. His son Louis XIV mandated Colbert to make France a strong naval power that could rival against the British Empire. Still today, engineered by Vauban, the many forts protecting the harbour top off the surrounding hills.

Green olives on the market, Toulon

Trading on the lively market, Toulon 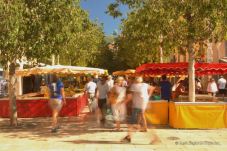 However, geographically stuck between the commercial harbour of Marseille and Nice, Toulon has remained in their shadows, even having somewhat of a bad reputation in France. For the past years, major renovation programs have been carried out in its medieval heart. Its patchwork of squares with fountains shaded by olive trees and colourful parasols invite passers-by to enjoy a Mediterranean lunch prepared with fresh ingredients from the market. 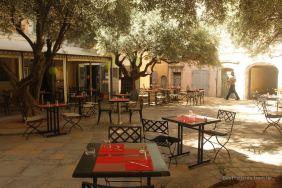 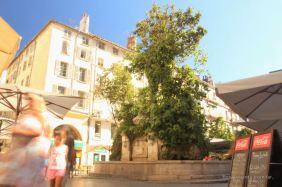 The fountain of the 3 dolphins, Toulon, French Riviera

Hungry from all these smells, we enjoy a delicious plat du jour for a bargain along Rue Paul Lendrin. Comfortably seated in the shade of a plane tree, the terraces are filled with locals taking their lunch breaks in a friendly atmosphere that seems to make the work day lighter. 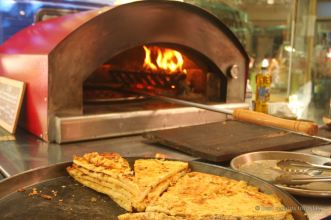 Freshly prepared lunch with ingredients from the market, Toulon

Leaving the medieval parts of the city with its narrow streets halved by their characteristic  gutters, we venture in the newer part designed by Haussmann (the famous baron who modernized Paris in the 19th century). The square Victor Hugo is the hyphen toward the 19th century and its tall buildings and wide avenues. The Opera House dominates the square and is one of France’s most outstanding ones, comparable to the Parisian Opéra Garnier. 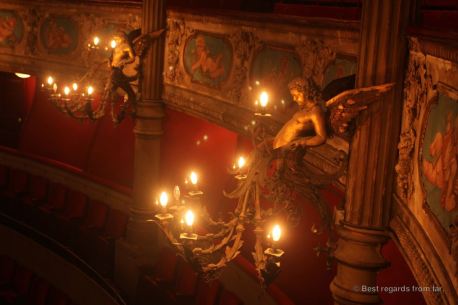 Angel holding the light in the opera house of Toulon, French Riviera 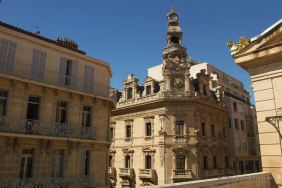 The 19th century architecture from the terrace of the opera house, Toulon

The view from the terrace of the opera house, Toulon

The ceiling of the opera house, Toulon

We understand better why the Toulonnais were singing their love for their city with their Southern French accents on the market, ending in a whisper. If they are proud being from Toulon, they want to keep to themselves this rough diamond in its stunning jewel case with the Mont Faron in the background and bathed by some of the most beautiful beaches of the French Riviera.

A lovely beach in the heart of Toulon 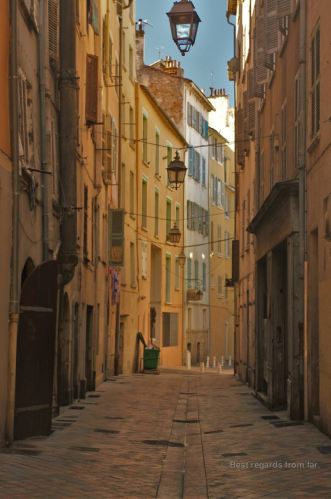 A typical sqaure of Toulon with its fountain

Save this pin for later!

For more in and arounf Toulon, click on these images:

10 thoughts on “Toulon, the rough diamond of the French Riviera & its best kept secret!”