He comes back from his 40-minute run in 33 degrees Celcius. He is given a rope and starts rope skipping for a full 10 minutes in a row, focussed and with a straight face. The veins on his temples start showing and when he is done he gets rid of the jacket that must feel extremely suffocating. Pearls of sweat start dripping from his muscled body which he shyly reveals in the burning sun. Without hesitation he starts doing his push-ups. He is breathing heavily when he sits down to tightly wrap some cotton bandages between his fingers and around his hand. He knows the drill. He puts in his mouth guard, slips his hands into some gloves and enters the boxing ring where his trainer is awaiting him. He is ready to start the training from a former Muay Lao champion and also olympic boxing champion, Khampanath Kounlavong, in the backstreets of Vientiane, the capital of Laos. 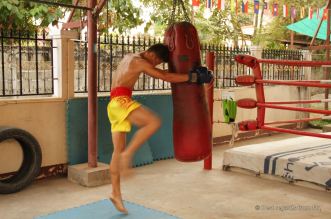 “Two more minutes of rope skipping!”, the voice of our Muay Thai trainer echos in the gym of the Angkor Wat Fight Club where I am desperately trying to not give up and fullfill the five minutes of rope skipping, thinking back how a few days before we have seen a future champion train. With our muscles warmed up we start the training that is different from ordinary boxing. The one-hour session proves to be a total body work out.

It is harder than it seems as we are working with a partner allowing us to practice timing, accuracy, rythm and distance. Obviously, we do not want to hurt the other person, yet you want the training to be effective and this requires some skills and practice.

Muay Thai boxing is also known as “the art of eight limbs” as it is contains a combined use of fists, elbows, knees and shins. Different than with the regular boxing the fighters are allowed to aim for the knees with kicks, and hit each other with the elbows. With about seven different punches, eight ways to use your elbow in an attack, nine different kicks such as the straight kick, the half-knee half-shin kick, the jump kick…, and roughly eight different techniques with which you can attack your opponent with your knee, we are not going to master this sports any time soon.

Most martial arts and combat styles originate from Asia. The Khmers are believed to have practiced a Cambodian martial art called pradal serey ever since the 9th century, evidence of this is still visible in the bas relief of the Angkor Wat temples. As the Angkor empire reached far into what is now Laos and Thailand, Cambodia’s pradal serey fighting might have laid out the fundaments of Muay Thai and Muay Lao, two styles that are very similar and have the same rules during competitions. It were the Thai people who marketed in the western world hence the word Muay Thai.

Tired from our training we stroll back to our hotel through pub street. Groups of people are cheering, watching a Muay Thai fight on TV. More curious now, we take a closer look and witness the guy who was training in Laos, life on television in Cambodia, winning his first major fight in Bangkok, Thailand. 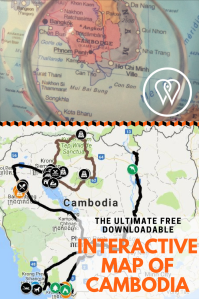